The movie, “You Again,” released Sept. 24, shows the multigenerational and l 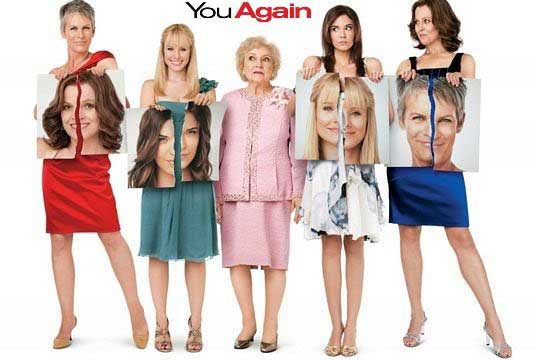 The movie begins with Marni (Kristen Bell) returning home for the wedding of her brother (Jimmy Wolk) and finding out his future wife Joanna (Odette Yustman), aka J.J., is the girl that bullied her in high school. Bad memories also surface for Marni’s mother Gail (Jamie Lee Curtis) when she faces her former high school rival, Joanna’s Aunt Ramona (Sigourney Weaver).

In real life, some of the actresses remember having low self-esteem in high school. In a recent appearance on the “Daily Show,” the 5 ft. 11 in. Weaver told Jon Stewart, “I was a low form of life in high school. What saved me is that my expectations of myself were very low and I also made fun of myself faster than anyone else could.”

Stewart said, ‘I wish there were a way to school kids with the idea that high school and junior high school is a phase because you do get a sense this is a permanent condition from which you will never escape.”

The movie is billed as a comedy, but there’s nothing funny about the scars we carry from high school into our adult lifes says Betty Hoeffner, author of the “Stop Bullying Handbook.” Hoeffner is co-founder of Hey U.G.L.Y., — Unique Gifted Lovable You – a nonprofit dedicated to helping youth discover how to counter bullying and other issues connected to low self-esteem.

“The key is to get in touch with the emotion that is causing you to bully,” explained Hoeffner. “In the movie, Sigourney Weaver (Ramona) recognizes, and is able to admit, that she was jealous of Jamie Lee Curtis (Gail). When she got in touch with that emotion it broke down the wall that was holding her back, enabling her to make a heartfelt apology. Once Gail felt the sincerity of the apology she was able to forgive Ramona. It also allowed her to own up to the fact that she too had been jealous of Ramona.

“This was pivotal to the healing process of not only their relationship, but also of themselves,” Hoeffner continued. “Hey U.G.L.Y. endorses “You Again” and highly recommends that anyone who has been bullied or has been a bully rush out and see it. If you can, see the movie with your family. We hope it starts a dialogue about your bullying experiences and, now that you know better, how you will handle situations differently.”

“A large percentage of the population never leaves their hometown,” explained Hoeffner. “Educators report to us that parents who may have been bullied or were bullies are sending their children to schools they attended. Former classmates who hold onto high school scars can unknowingly prompt their children to perpetuate the bullying cycle.”

Hoeffner’s nonprofit works with youth to help them be who they are instead of who they think they need to be. This winter, Hey, U.G.L.Y. will launch parenting seminars and the website HeyUGLY4Parents.org, to help parents help themselves and their children.

“Our aim is to help parents discover ways to break the bullying cycle and heal those high school scars in themselves and their children,” Hoeffner said. “Almost everyone has bullied or been bullied. Once you learn how to recognize and take responsibility for your behavior, you can model that to your children.”

Bullying seems to be particularly prevalent in middle or junior high school, with three-fourths of public school principals in a 2008 survey reporting it as a serious problem.* Dr. Sue Bryant, principal of St. Stanislaus Kosta Catholic School in Michigan City, Ind., is among those who have addressed the problem. She sought help from Hey U.G.L.Y. when a group of sixth graders were bullying each other. Sixth grade teacher Carrie Miller saw how Hey U.G.L.Y.’s anti-bullying program got students to take responsibility for their own bullying behavior.

Hoeffner said, “Not only are the bullied suffering, but bullies are as well. We designed our program to help both groups discover ways to feel good about themselves and each other.”

Bullying can take the form of name calling, pushing, giving dirty looks, fighting and spreading rumors. Experts say the facts are troubling because bullying too often leads to violence, loss of self-esteem, depression and even suicide. Hoeffner almost lost a teenage family member to suicide so she understands the critical need to halt bullying.

“Since the number one influence on youth is their peers, we design all of our programs to collectively empower the students to be a part of the solution,” Hoeffner said. “Our ‘Stop Bullying Handbook’ was designed to give young people a voice against bullying. It’s the first resource of its kind to guide teens in helping each other deal with this sensitive subject. We help them learn how to have empathy for themselves and others. This is a key factor in letting go of the pain instead of carrying high school scars into adulthood as the movie shows.”