‘Karate Kid’ Fights Back with Anti-bullying Message
by Laurie Wink 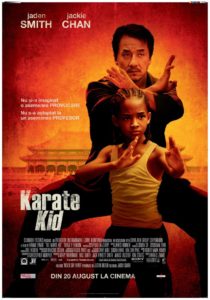 “The Karate Kid,” which opened in movie theaters June 11, conveys an anti-bullying message that encourages tweens and teens to protect themselves from abusive peers. Hey U.G.L.Y., a nonprofit youth empowerment organization, endorses the family-friendly film for its anti-bullying theme.

Hey U.G.L.Y. — Unique, Gifted, Lovable You – is a nonprofit organization dedicated to helping youth self-discover the solutions to bullying, obesity and racism. Betty Hoeffner, author of the Stop Bullying Handbook and co-founder of Hey U.G.L.Y., said bullying is one of the most critical issues now facing U.S. students at all grade levels.

“And, as shown in the movie, bullying is a big problem in other countries as well,” Hoeffner said. “We need to help kids see beyond the bravado of bullies so they can recognize the pain and insecurity most bullies feel.”

The remake of the 1984 “Karate Kid” stars Jaden Smith, who plays 12-year-old Dre Parker. He moves from Detroit to the strange and baffling Chinese city of Beijing, where his mother, Sherry, has taken a job. On his first day, Dre goes to a park to make friends and connects with Mei Ying, a young violinist. As they talk, a gang of Chinese youth led by Cheng, the chief bully, comes over to separate them. Dre tries to defend the girl but his slight stature and lack of martial arts experience are no match for the much tougher Chinese boys.

Dre endures several more incidents of violent bullying by Cheng’s gang until he is defended by Mr. Han, played by Jackie Chan. Han is the janitor for the Parkers’ apartment building and, as it turns out, a Kung Fu master. In trying to stop the bullying, Mr. Han takes Dre to the martial arts academy where the bullies are learning from Master Li. Li takes a Darwinian approach to Kung Fu: “no pain, no mercy, no fear.” Mr. Han makes a deal with Master Li to enter Dre in a martial arts tournament, where the young American will face his bullying opponents. In turn, the bullies will agree to leave Dre alone while he trains.

Dre wants to learn Kung Fu in order to seek revenge on his attackers. At the hands of Master Han, he learns that Kung Fu is not about fighting but about learning respect for yourself and others. Mr. Han teaches Dre to discipline his mind and body by focusing his energy.

In commenting about the film, Jackie Chan said the martial arts are not for hurting people, but for protecting people. He hopes the film will introduce audiences to the reality of martial arts, instead of the dramatized movie versions.

Hoeffner cautions parents that the film uses plenty of violent scenes among children to get the non-violent viewpoint across. But she believes it’s important for young people to recognize and talk about their own tendencies to victimize others, whether physically or emotionally.

“Hey U.G.L.Y. uses self-esteem and diversity-building activities to help young people uncover their own bullying tendencies and understand the negative impacts of that behavior,” Hoeffner said. “Our approach is successful because students teach peers about how to stop bullying.”

The Stop Bullying Handbook is designed to give youth a voice against bullying and the courage to be part of the solution. It is the first resource of its kind to guide teens in helping each other learn how to defend themselves and others against bullies while monitoring their own bullying tendencies. Since its release on Feb. 10 of this year during National Stop Bullying Week, the handbook has reached over 2,250 students.