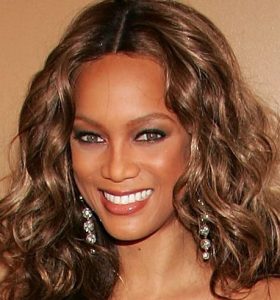 “The modeling industry goes in and out of different styles and body types that are supposed to be hot at that moment. And right now, it’s not so much the heroin-chic, because the models are looking a little bit healthier to me–and when I say healthy, I don’t even mean body type, I mean just facial pigment and stuff like that. They have blush on their cheeks now again and they look a little healthier. But still such a stick, skinny ideal–which would have worked for me when I was 11 years old because I was 98 pounds and my same height and now I’m 130. So I was really, really thin and insecure. It would have worked well for me to look at that in a magazine and see that that was called beautiful. But the majority of little girls aren’t that way. The majority of them are struggling with their weight and are the opposite way. So I just think it’s important to show different body types and say that they are all beautiful which is not really what they do. When I lost all this weight–I went to an all-black private elementary school–and all the kids used to call me all kinds of horrible names. Then when I went to a mixed junior high school and all of my white friends would be like, ‘Oh my god, you’re so gorgeous. You’re so skinny. ‘By the way, I looked disgusting, I looked sick. But they’d be like ‘You’re so skinny. I wish I could be like you.’ And all my black friends would be like, ‘Girl, eat a pork chop! You are so skinny.’ And the white guys would be like ‘Tyra’s cute’ and the black guys would be like, ‘She’s too skinny. She needs some booty. I don’t want her.’ So it’s so cultural. And it’s sad because women, when it comes to their body types, are ruled by men in their culture. So white women want to be super skinny because that’s what white men seem to be attracted to. And the black guys want more meat.”  GQ