Have fun discovering, discussing, and embracing your love energy and fear energy emotions.

Our games can help you live life consciously so you can turn negative self-talk into positives.

Get in touch with your feelings by literally touching them! 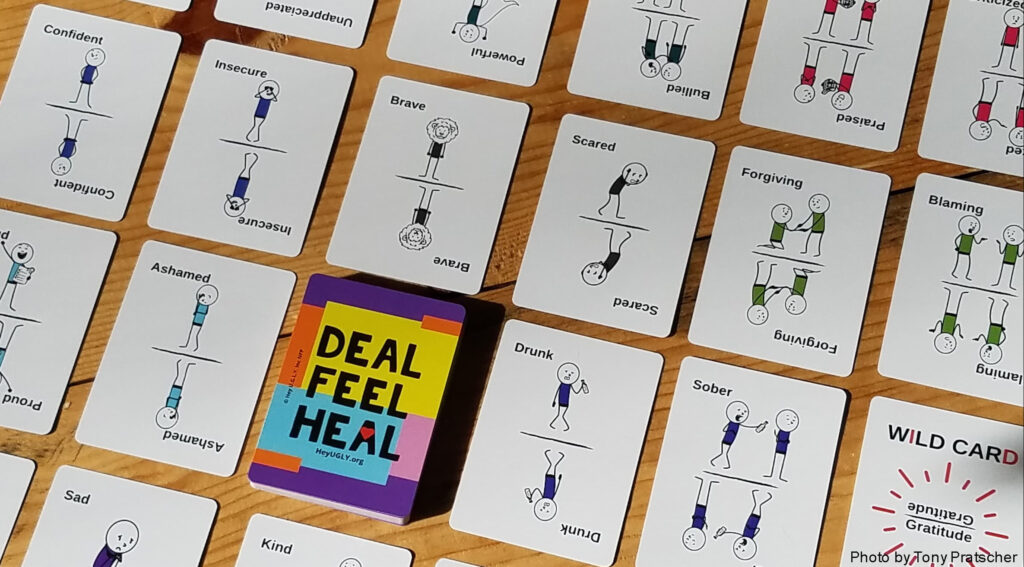 Based on the philosophy that all feelings can be narrowed down to two categories…Love and Fear, Hey U.G.L.Y.’s 52 card deck has 25 love energy cards and 25 fear energy cards with two ‘Gratitude’ wild cards. We chose gratitude because that state of being can repel negativity which allows our inner joy and love to shine.

One of the games people love is Buddha Said. Buddha teaches that whenever you are feeling a fear-based feeling go to the opposite feeling to feel better. In our deck of cards, each love-based card has an opposite fear-based card. The object of this game is to see how fast you can put all the love feelings over the opposite fear feeling. You can play this game like Solitaire or compete with your friends.

ENDORSEMENTS:   Dr. Sue Bryant, retired educator and school principal: “When children engage in Deal Feel Heal games,”they are practicing life skills, in particular, how to adapt inner feelings to an outside stimulus. The tasks practice higher-order thinking and problem-solving skills, and the social and gaming aspects cement the learning. The gamers have fun learning how to recognize their best selves!”

Kimberly L. Brunt, Clinical Assistant Professor of Psychology at Purdue University Northwest:  “The card games allow people to review, discuss, and process emotions in a safe and fun activity while encouraging them to identify and practice skills by which to transfer negative emotions into more positive ones.”

Step two:    Go through the deck of cards placing, face up, all of the fear energy cards.

Step three:  Deal out the love energy to the players.

Step four:  Have each player take turns placing, face up, the corresponding opposite love energy card.

Step One:  The deck is divided evenly, with each player receiving 26 cards, dealt one at a time, face down. Anyone may deal first.
Each player places their stack of cards face down, in front of them.

Step 3- Winner:  The game ends when one player has won all the cards.

WHY BULLIES BULLY?
(to be played with a group of two or more people)

Step Two.   Take the fear energy cards and turn them face up

Step Three.   Have the player on dealer’s left select the card he/she thinks and feels is the main reason why a bully bullies.
Open up for a discussion with your group. When discussion ends. The next player selects a card and proceed as above, until
all fear energy cards have been used.

WHAT ARE THEY AFRAID OF?
(to be played with a group of two or more people)

Step Two.   Select a fear energy card, for example, jealousy. Think of someone you know who is jealous, or
a time when you were feeling that fear energy. What do you think a person is afraid of if they are jealous.
Share it with your group, then open it discussion to find out what others think. When you have finished, the
next player takes a fear card, and the process continues. This game is designed to help you move out of
fear energy and to also have empathy for yourself, and others, when they are stuck in a place of fear.

Step One.   Dealer shuffles the cards and deals one card to each person

Step Two.  Dealer asks person to his/her right to show their card and explain how that feeling either affected their life or how they overcame it.
If they have NOT experienced that feeling they can return the card to the dealer and request another card.
The dealer buries the card into the deck and deals that player the next card on the top of the deck.
The player can now discuss how that feeling affected them.  Time limit is one to three minutes.
That person discards his/her card and picks up another card. The game moves on to the next player. 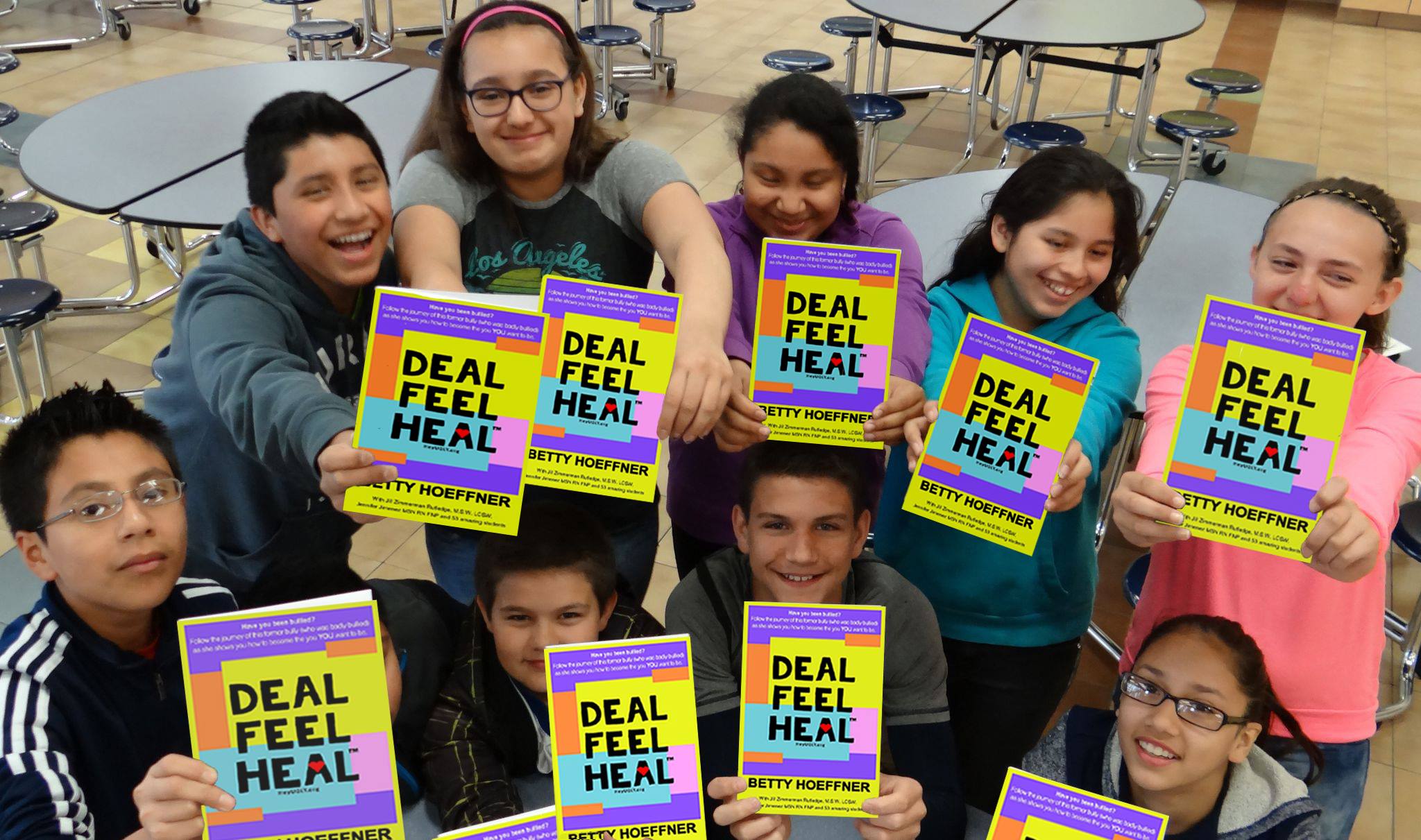 “Wow! DEAL, FEEL, HEAL is an extraordinary book by Betty Hoeffner. I just finished reading it cover-to-cover this morning – in one sitting. But, of far greater importance, I am looking forward to reading it again and again to savor each simple, yet profound, section to carefully extract every little gem of loving wisdom it shares! To me, Betty was already Wonder Woman in her super-human feats to bring understanding and healing and an end to substance abuse, bullying and suicide amongst youth in the US and around the world.  Yet, throughout this book, she shows us, how in every difficult situation we encounter in life, we may all learn to progress on our way to greater peace, joy and fulfillment. Never before have I read a book, offered as a kind of easy-to-use resource and guide for young people, that so inspired me and that brought forth a bouquet of smiles and far more than a few tears of joy, as did DEAL, FEEL, HEAL.”   Michael J Tamura, Spiritual Teacher and Author of YOU ARE THE ANSWER

“Betty Hoeffner is to be commended for the honesty she deals with the subject of both being bullied and even at times being a person who has bullied others. In ‘DEAL FEEL HEAL she talks about her life-long journey to find love and respect for her own person, as well as to better understand how other people feel. She shows us how a person, with some hard work and self awareness, can learn from her mistakes and become a stronger, better centered individual. In sharing her efforts to be the best person she can be, Ms. Hoeffner teaches us how we can overcome our own fears and limitations to become better, more caring people.”   Bill Zimmerman, author & creator of MakeBeliefsComix.com