HOW TO NOT LET A BULLY WIN BY LOVING YOUR NATURAL SELF
Hey U.G.L.Y.,’s impactful interactive self-esteem & empathy-building bullying/suicide/racism prevention school assembly featuring the inspiring, Sanah Jivani, who lost her hair at age 12 due to Alopecia 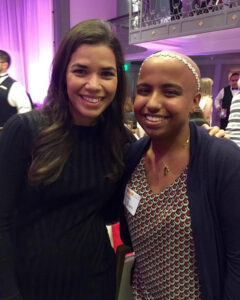 Sanah Jivani  lost all of her hair when she was in middle school due to Alopecia. She was bullied beyond belief with one bully putting a note in her locker that read, ’50 ways to kill yourself’.  Sanah was featured on Good morning American and in the documentary, LOOK TO THE SKY, a film that shares the inspiring true stories of young people who have demonstrated the spirit of Superman which explores the power of hope and the importance of positive ideals while encouraging viewers to find the super hero within themselves. She was named one of the ‘Most Inspiring College Women’ by HER CAMPUS’ 22 UNDER 22  and voted one of the top 12 social media warriors in 2016 by MTV News.

Sanah’s message…
“You can take adversity and turn it into the opportunity to serve others.”

Sanah is the founder of LOVE YOUR NATURAL SELF FOUNDATION,  a 501(c)(3) nonprofit, that empowers people to celebrate who they are by promoting positive internal dialogue and self-care. They work in 28 countries on 100 campuses. Their biggest project is the International Day of Self Love. This day takes annually on February 13th, the day before Valentine’s Day, because it’s important to love yourself before loving others. Schools, communities, and businesses celebrate this day in person and by sharing photos on social media.

To have Sanah speak to your students
call 219-814-4224 or email PreventBullyingNow@heyugly.org to schedule.