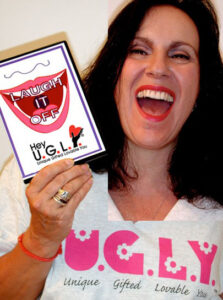 Laughter has been proven to help reduce stress, improve heart health, lower cholesterol and impact weight loss. With this knowledge Hey U.G.L.Y. invented Laughtercising® especially for young people who are stressed because of bullying, exams and relationships. We hope you will add laughter to your health, fitness and beauty regime. Comedian Tom Dreesen calls our Laughtercising MP3, “The cure for road rage.” Scroll down to read what celebrities and experts say about the health benefits of laughter.

Our Laughtercising audio file contains 60 minutes of contagious laughter to help you get your “laugh on.”  Since laughter is also a great stress reliever, we made the CD 60 minutes long so it can be played in the background, like Zen music, to lighten your spirit during times of stress. Playing the CD quietly in the background while at work, studying for exams or struggling with an angst-ridden problem can help lighten your mood and put a smile on your face.  It’s also great to get a party started as it helps lighten the mood and puts a smile on your face. Plus, 100% of the proceeds from your purchase help us in our mission to empower youth to be part of the solution to bullying, substance abuse, racism and suicide.

ENDORSEMENTS:  I ordered your CD, years ago. I was sinking into a depressed state, as I had acute Lyme Disease and was house bound. I listened over and over, and laughed while listening, over and over…it lifted me up. I have shared and suggested the CD with others who are depressed, don’t know if they ordered it. Thank you. Bonnie Fladeland

I had just lost a close family member and hadn’t smiled or laughed for over a week, until I heard your contagious laughter on WGN-Radio as I was driving home. I bought ten copies for everyone in my family so they too could laugh and smile again. Thank you so much.

LAUGH IT OFF Volume 1 MP3Instructions on the LAUGH IT OFF CD (TD) advise listeners to laugh continuously for at least one minute. Every day, increase the laugh session until you can laugh, nonstop, for ten minutes to get a great, LAUGHTERCISING® workout.

Michael Tamura, author of, You Are The Answer is the inspiration behind Hey U.G.L.Y.’s Laugh It Off, Laughtercising® MP3. In one of his seminars, attended by Hey U.G.L.Y. co-founder Betty Hoeffner, he said, “In order to elevate your spirit you should laugh, nonstop, for 10 minutes a day.”

Dr. Andrew Weil, in his April 2005 newsletter wrote: I think it’s (laughter) one of the most effective ways to reduce stress, and preliminary research suggests laughter may also boost immunity, relieve pain, lower blood sugar in people with type-2 diabetes, and help protect against heart disease.

“Laughter is healing and it’s documented that medically it’s good for you to laugh. Laughter is so important.”

“Everyone should laugh at least once a day. It provides emotional and physical benefits.”

“…laughing is so extraordinarily healthy for the mind and body. It changes our cells; it changes our breathing. And it’s contagious!” InSTYLE Oct 2020 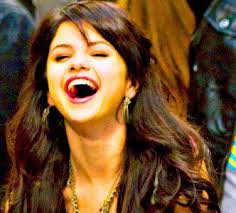 “I love to laugh. I’m telling you, it’s the greatest thing. I do not have a very delicate laugh.”  Allure Oct 2020

“Laughing is great exercise. It tightens your abs, gets your endorphins going, and filters out all those anxieties that weigh you down.”

Two studies released on March 8, 2005 at the American College of Cardiology recommend that people try to laugh on a regular basis. Dr. Michael Miller of the University of Maryland School of Medicine in Baltimore said, “Thirty minutes of exercise three times a week, and 15 minutes of laughter on a daily basis is probably good for the vascular system. The recommendation for a healthy heart may one day be to exercise, eat right and laugh a few times a day.”

According to a study by Maciej S. Buchowski, PhD, and his colleagues, using a whole-room indirect calorimeter at Vanderbilt University in Nashville, a daily laughter workout of 15 minutes can burn 40 calories and melt away 4 pounds over the course of a year.

Up to 80 muscles are used during a hearty laugh, the blood pressure rises, the heart beats faster and blood oxygen levels increase. In fact, a study released last year by German Gelotologist Professor Gunther Sickl revealed that a one-minute guffaw has the same health benefits as a 45-minute gym workout. When the laughter stops, the blood pressure returns to normal and stress hormones are reduced – actually strengthening the immune system.

Deepak Chopra – Laughter is definitely a healing experience, and we’re not talking metaphorically, we’re speaking absolutely literally. Laughter is one of the best medicines you can have.

According to University of California, Irvine Professor Lee Berk, “If we took what we know about the medical benefits of laughter and bottled it up, it would require FDA approval. Laughter can lower blood pressure, trigger a flood of endorphins – the brain chemicals that can bring on euphoria and decrease pain, and enhances our immune systems. Gamma-interferon, a disease-fighting protein, rises with laughter. So do B-cells, which produce disease-destroying antibodies, and T-cells, which orchestrate our body’s immune response. Laughter lowers the flow of stress hormones, which suppress the immune system, raise blood pressure, and increase the number of platelets, which cause clots and potentially fatal coronary artery blockages.”

According to William F. Fry, M.D., associate professor of clinical psychiatry at Stanford University, laughing 100-200 times per day is the cardiovascular equivalent of rowing for 10 minutes. When something strikes you as funny, you laugh. And when you laugh, your body responds. You flex, then relax, 15 facial muscles plus dozens of others all over your body. Your pulse and respiration increase briefly, oxygenating your blood. And your brain experiences a decrease in pain perception, possibly associated with the production of pain-killing, pleasure-giving endorphins.

“When I get stuck in traffic I play the ‘Laugh It Off’ CD laugh track. I found it to be the cure for road rage. It also helps our youth as the CD is a fundraising product for Hey U.G.L.Y., the nonprofit organization that helps teens counter challenges such as eating disorders, bullying, violence, substance abuse and suicide.”

“It is impossible for you to be angry and laugh at the same time.”

According to Jeffrey Briar, laugh instructor at California’s Blue Pearl Yoga, those who take the [laugh] class regularly will see an improvement in their self-confidence.

According to Steve Wilson, physiologist, joyologist and founder of the world laughter tour and a board member of the Association for Applied and Therapeutic Humor, when you look at all the research on laughter, it strongly leads us to the conclusion that one of the main purposes of laughter is the discharge of tension. Laughter also energizes people. If you laugh long enough and hard enough you reverse the physiology of stress. And anything that can reduce the ill-effects of stress is an ally in health and happiness.

Laughter is being called the latest weapon in the fight against heart disease, ever since University of Maryland researchers reported at an American Heart Association meeting in November that heart-healthy people are more likely than those with heart disease to laugh frequently and heartily, and to use humor to smooth over awkward situations. There’s even hope, the scientists say, for cranky people who rarely laugh and for those without a sense of humor: They can learn.  Kathleen Doheny on WebMD

In their best-selling book, “The Okinawa Program,” based on an ongoing study of elderly people on the Japanese island of Okinawa, Dr. Bradley J. Wilcox, Dr. Craig Wilcox, and Dr. Makoto Suzuki wrote that “during laughter, muscles throughout your body tense and relax in a way that is strikingly similar to stress-reduction techniques. Laughter keeps muscles supple as well as relaxed. It also has been shown to stimulate the immune system.”

Sophie Scott, a neuroscientist at University College London, said, “laughter has also been shown to reduce the stress hormones cortisol and adrenaline and increases the body’s uptake of the feel-good endorphins.”

When Jay Leno asked the star of NBC’s hit show, “My Name is Earl” if he gave the finger when he drove in L.A.’s horrific traffic Jason Lee quipped, “It’s how we stay connected in L.A.”

“When I get stuck in traffic I play a CD of contagious laughter called ‘Laugh It Off’,” said Dreesen, who is chronicling his life story in a Broadway-bound play called, ‘Shining Shoes and Sinatra.”

Dreesen, who opened for Frank Sinatra for 13 years says, “I have ‘Laugh It Off’ on my CD changer and I found it to be the cure for road rage. It also helps our youth as the CD is a fundraising product for Hey U.G.L.Y.-Unique Gifted Lovable You, the nonprofit organization dedicated to helping youth with self-esteem and empathy-building tools, to help them counter challenges such as eating disorders, bullying, violence, substance abuse and suicide.”

“Laughter is one of the most effective ways to reduce stress,” according to Dr. Andrew Weil who notes “…..preliminary research suggests laughter may also boost immunity, relieve pain, lower blood sugar in people with type-2 diabetes, and help protect against heart disease.”

Why did the charity choose to make a CD of contagious laughter?

“We know the healing powers of laughter and how it can relieve stress,” said Betty Hoeffner, the nonprofit’s co-founder.”Today youth are under tremendous stress and we wanted our CD to be a tool to help them de-stress and lighten up.”

According to the American Academy of Child and Adolescent Psychiatry, most teens experience more stress when they perceive a situation as dangerous, difficult, or painful and they do not have the resources to cope. Some sources of stress for teens might include: school demands and frustrations; negative thoughts and feelings about themselves; changes in their bodies; problems with friends; unsafe living environment/neighborhood; separation or divorce of parents; chronic illness or severe problems in the family; death of a loved one; moving to a new community; changing schools; taking on too many activities or having too high expectations; family financial problems.

Some teens become overloaded with stress. When it happens, inadequately managed stress can lead to anxiety, withdrawal, aggression, physical illness, or poor coping skills such as drug and/or alcohol use.

Dreesen may not be the expert on stress but he says that whenever he sees someone fuming in the car next to him he simply rolls down the window and blasts the laughter which either makes the person laugh or really p_ sses them off.”

In other words stress is experienced everyday either on the road or at home and providing a stress free environment of laughter might just be the “cure” everyone has been looking for. The CD is available at HeyUgly.org.