LA PORTE – Brandi Morrow once laughed for 10 minutes straight. The 15-year-old was up late the night before with a friend and they entered that odd, worn-out delirium that often leads to laughter.“That was intense,” she said. “It took me awhile to get my breath back.” 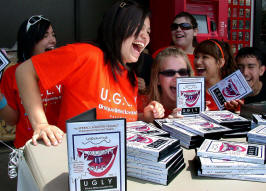 So the La Porte High School freshman was prepared to ambush strangers with laughter for World Laughter Day.Morrow and a small group of fellow students participated in the Spread Laughter Project on Sunday. They stood, danced and joked around outside Kroger on Pine Lake Avenue and tried to get customers to laugh as they entered and left the grocery store.The goal was to sell copies of “Laugh it Off.” It’s a $5 hour-long laugh-track CD featuring the guffaws of Richard Schoen, a voice actor who has narrated commercials for everything from Fruit Loops to Miller Beer, and Betty Hoeffner, a representative of Unique Gifted Lovable You, the self-esteem building organization that put out the CDs. Hoeffner was on-hand Sunday and the CD played in the background while the students made their pitch.The money is going toward U.G.L.Y. and students’ community projects.For all their efforts at making others smile, the kids were surprised how many people literally ran away from them.“(One) guy said he didn’t like to laugh,” Martin Garcia, another volunteer, said.There was a lot of that. About half the people leaving Kroger on Pine Lake Avenue walked past the students without saying a thing. The other half stopped, some even smiled. But only about 50 people had bought the CD after more than two hours.“I think I learned there are different kids of people,” Martin said. “People who are going to listen and some people just think you’re going to take their money.”Brandi said she felt bad for the latter group.“Why wouldn’t you want to laugh?” she said.But the students didn’t get discouraged. They stayed upbeat even as their three-hour shift ended. That enthusiasm rubbed off on some of the customers.“It’s contagious like the swine flu,” Fabian Rangel said as he bought the CD. He said he’d listen to it at home as a way to unwind.The constant laugh-track worked for the volunteers as well. Many said they felt happier after a few hours of laughing and that they would bring the chuckles back home.“I’m probably going to listen to it when I get home just to see what my parents say about it,” Brandi said.