“If You Really Knew Me,” a documentary series that premiered July 20 on MTV, gets teens to drop their masks and open up about their lives. By revealing who they really are, the young people discover they’re not so different.

Each episode takes place at a different U.S. high school during Challenge Day, when students engage in activities designed to move them out of their comfort zones. In each episode, five selected students discuss their issues in more detail.

Betty Hoeffner, co-founder and president of Hey U.G.L.Y. – Unique, Gifted, Lovable You – says “If You Really Knew Me” points out the power of peer support. Hey U.G.L.Y. is a non-profit organization dedicated to helping youth self-discover solutions to counter obesity, bullying and racism.

“We are recommending all of our students and educators watch this show,” Hoeffner said. “I love how it helps students realize that they are not alone. That makes it easier for them to be who they are instead of who they think they need to be.” 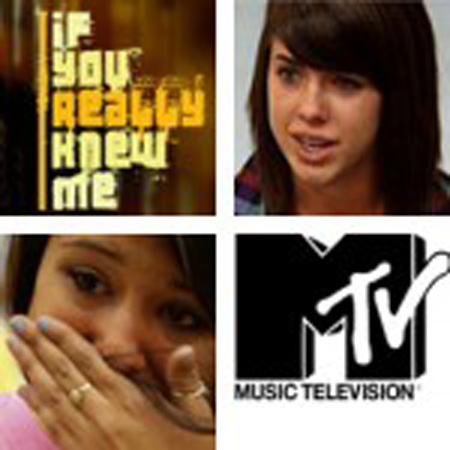 The premier episode took place at Freedom High School in Oakley, Calif. It featured: Barbara, an “a-quadder” or freak; Leikin, a leader in the popular group; Rob, a gay band geek; Travis, a jock; and Kabraea, a loner. The stereotypes of geek, jock, nerd or freak are shattered as students form small groups and each one shares feelings of shame, self-hatred and anger as well as attempted suicide. Group members come together physically and emotionally, offering peer-to-peer support.

Shayna Shelton, 18, a particpant of Hey U.G.L.Y.’s Hue-Man Being Project(tm) watched the premier with a friend and was moved by the way members of the different groups opened up to each other.

“At one point listening to Rob, it made me tear up because he was talking about how his parents tell him he’s going to hell for being gay,” Shelton says. “It broke my heart that they aren’t accepting to diversity and that even though he is their child they can’t accept him for who he is.”

“If You Really Knew Me” is a must-see for all teens, parents, and teachers says Jill Zimmerman Rutledge, a Chicago-based therapist with more than 20 years of experience counseling teens and board of advisor member of Hey U.G.L.Y. She believes the program gives a realistic view of what it’s like for a teen to navigate through high school.

“It shows teens that it doesn’t really matter what group or clique they belong to,” Zimmerman Rutledge says. “Deep inside, the commonalties of their inner pain and problems are what hold the promise of uniting them so that they can support one another.”

Kurt May, a seventh grader, says “If You Really Knew Me” allows teens to see others’ pain and to realize that we all go through different things that hurt us.

“I think the show will help others have a voice if all schools did this because it will help kids and teens speak and be heard,” May says. “We have the power to cause a positive chain reaction to stop bullying and see people in a positive way.”

As a middle school student, May joined the Hey U.G.L.Y. Stop Bullying Task Force, created through a partnership between Hoeffner and K-8 school principal Dr. Sue Bryant. Bryant was concerned about bullying she observed among students.

Hoeffner says that, like those who participated in the Challenge Day experience, the anti-bullying task force members bond with each other through a series of exercises that helped them deal with racism, self-bullying, inability to forgive and the the sting of negative judgments.

“It’s so empowering to see students learn how to not only recognize when they are negatively judging others and themselves, but learn how to turn that negative into a positive like we did by turning ‘ugly’ into Unique Gifted Lovable You,” Hoeffner says.

The task force students came up with the “Stop Bullying Handbook” to help other teens form their own anti-bullying movements. The handbook suggests activities that teach teens about who bullies and why, how to spot common forms of bullying — verbal and physical abuse, social alienation, intimidation and cyber-bullying — and how to defend themselves and others against bullies.

“Teens and tweens who single out other kids to pick on usually don’t feel good about themselves,” Hoeffner says. “They first have to recognize their own part in bullying before they can find a solution. Shows like “If You Really Knew Me” are a great way to help youth tear down the walls of protection so they can be seen as who they are.”