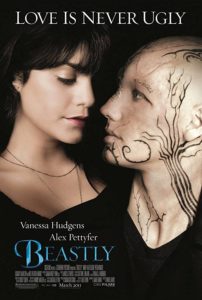 The movie “Beastly”, released March 4, shows how a teen being raised by a mostly absent, superficial parent can cause him to resort to being a bully. In an effort to encourage both teens and parents to see this movie, Hey U.G.L.Y.-Unique Gifted Lovable You, the nonprofit organization that empowers teens to be part of the solution to bullying, and their teen movie review board (SEEIT), are endorsing this movie.

At the beginning of the movie, seventeen year old Kyle (Alex Pettyfer) the spoiled, shallow and incredibly popular “good looking” clique leader at his high school delivers a speech saying “Beautiful people get it better. That’s just the way it is. So don’t embrace the suck.” The suck in this case refers to those students not falling under Kyle’s definition of beautiful.

“It’s hard for the viewers to feel sorry for Kyle until you watch the scene where he is asking his father (Peter Krause) why he loves him,” notes Hey U.G.L.Y. president, Betty Hoeffner. “His dad’s reply, after taking way too much time to think about it is, “because you are my son.” You can see the pain of that limited response on Kyle’s face. Throughout the movie you see all Kyle wants is his dad’s love and approval, but his dad is way too busy for that. And after Kyle’s father drops verbal bombs like, “People like people who look good and those who don’t are either dumb or ugly’ and “people like you in proportion to what you look like,” the audience begins to have empathy for him.

One person who doesn’t have empathy for Kyle is Kendra (Mary-Kate Olsen) who Kyle attempts to humiliate in front of all of the ‘cool kids’ at his school. A witch disguised as a high school student, Kendra casts a spell on Kyle to teach him a lesson in the treatment of others. His outer appearance is changed into one as ugly as he is on the inside, and only the love of another person, who can see past his looks, can turn him back to normal. If this is not attained within a year, Kyle will remain “beastly” forever. A shy classmate whom he had never officially met, Lindy (Vanessa Hudgens), could be his only chance of showing that inner beauty is what really counts.

In a recent interview on ET Hudgens said, “I think there’s a great message in this film. Beauty isn’t always as it seems to the eye. There’s so much more and I think we’re putting that out there in this film.”

“Kendra sort of takes Kyle on his journey,” said Olsen on ET. “She could be a witch type but I think everything that she does is for his good.”

“He is obsessed with his own vanity and can’t see the real beauty of life,” explained Pettyfer on ET. “It’s like a modern Beauty and the Beast. It’s got a tale of love and of coming to reason with who you are as a person.”

During the film, Kyle asks his blind tutor Will (Neil Patrick Harris) why he spends so much time trying to look good. Kyle wonders who Will is trying to impress. Will responds, “It’s not about how others look at me, but how I look at myself.”

Olivia Kuczmanski, a ninth grade member of SEEIT, believes this statement to be true, “because a person has to be happy with themselves above anything else.”

Hoeffner agrees and points to the scene where Kyle is asking his maid, Zola (Lisa Gay Hamilton) how he can get Lindy to like him. Zola responds, “She will like it when you are being who you are.”

“I thought this movie was a really great attempt at delivering a message to young people or at least to get them to take a pause and think about inner beauty, or simply appreciating everybody for their inner qualities rather than their outer shell,” explained Melissa Kuczmanski, a guidance counselor at Rolling Prairie Elementary School.

“A lot of people genuinely like you when you’re beautiful on the inside, and not a jerk,” said Zak Zahrn, an eleventh grader member of SEEIT.

No doubt Kyle’s bullying personality stems from a lack of self-love, frustration with his father and a total lack of empathy for his fellow man. Bullying is a critical issue today and experts say the facts are troubling, because bullying too often leads to violence, loss of self-esteem, depression and even suicide.

According to Daniel Goleman, in his book Emotional Intelligence, bullies do not have empathy for their victims, and will not stop picking on other children until they learn it. As seen in this movie, until empathy is learned, the character’s treatment of others does not end.

A new study released by the Kellogg School of Management entitled “Empathy Gaps for Social Pain: Why People Underestimate the Pain of Social Suffering” shows that victims of bullying often do not get the support, intervention or advocacy they need due directly to the fact that people fail to understand the long-term consequences of social trauma.

“Everyone knows that social trauma is unpleasant, but people are often blind to the full severity of these experiences and therefore don’t do enough to protect or intervene when victims suffer,” said study leader Loran Nordgren, assistant professor of management and organizations. “News stories in recent months centered around bully victims who took their own lives out of desperation and fear, whether harassed physically in school, or emotionally via text message, online or through social networks. Only by having a heightened sense of empathy to victims’ true suffering can we begin to pave the way for reform and new policies.”

“I was happy to see Kyle become an empathic teen,” said Hoeffner who created Empathy Learning Activity Plans for educators teaching students aged 7 to 17. “I hope Kyle’s journey and growth in this film will inspire teens to embrace each other as whole human beings. Additionally, I hope this movie will help parents to remember the power of their words and how they can build someone up and tear someone down.”