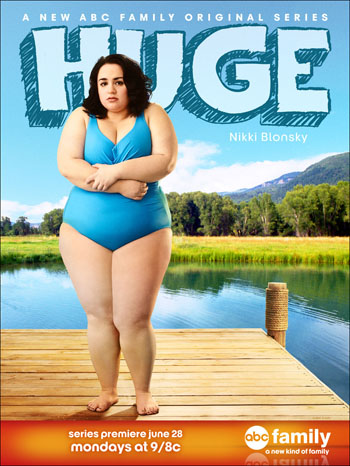 Many overweight kids who’ve struggled to fit in with peers will relate to the TV drama “Huge,” a ten-episode show now running on the ABC Family cable channel.

The show is based on the book, “Huge” by Sasha Paley and takes place at Camp Victory, where overweight campers battle issues with their weight, self-esteem and identity. Main character Wil (Nikki Blonsky), short for Willamina, boldly says she likes her body and plans to gain weight at camp. She’s angry with her parents for sending her to fat camp and acts out by selling smuggled snacks to fellow campers. Wil immediately butts heads with fellow camper Amber (Haley Hasselhoff), an attractive blond who’s preoccupied with her appearance and getting boys’ attention.

According to Jill Zimmerman Rutledge, a Chicago based eating disorders therapist who has been counseling teens for over twenty years, “overweight teens will identify with the campers’ different attitudes about weight loss, and the difficulty of changing unhealthy habits.”

“Viewers will find this show sometimes humorous and sometimes heartbreaking as it sheds some light on the struggles of teens that don’t fit the cultural ideal,” says Zimmerman Rutledge, author of the award-winning books, “Picture Perfect: What You Need to Feel Better About Your Body,” and “Dealing With the Stuff That Makes Life Hard.”

“Huge” gives a realistic look at how campers’ painful feelings about their families affect their relationships with food and their self-esteem, according to Zimmerman Rutledge.

“I liked episode 2 which showed how the campers and the director all had complicated feelings about their parents and families, and how these feelings affect their relationships with food,” she said. “I liked the example of Dorothy, the director, struggling with telling her mother that she had hired her dad at camp. She used food to deal with her feelings, and ended up never dealing with the feelings directly-she never told her mother the truth. Will had a good experience of being ‘parented’ by Dani’s mom and by Dorothy’s dad–in both cases, she was able to feel support which enabled her to get her feelings out in the letter to her parents and to try something new by playing basketball–and feel good about it. Her lack of connection with her own parents gave her a lot of pain, but feeling supported by adults gave her a new confidence in herself and hopefully this will translate into a more positive relationship with food.”

Zimmerman Rutledge’s only concern about “Huge” is that it is sending a message that restricting certain food groups and cutting out treats are keys to weight loss. Reducing calories is not the only way to approach weight loss, she notes.

“Many experts in the field of eating disorders feel that having a treat a day is a way to curtail binge eating,” Zimmerman Rutledge says.

Personal trainer Jillian Michaels, star of “Losing It with Jillian” and “The Biggest Loser,” agrees that the root of obesity is usually emotional. In the May 31 issue of Time, Michaels said childhood obesity is out of control. “A big part of this is economic,” she said. “Fake foods are more affordable. It’s enticing people to eat more because they think they’re saving money when they’re really just buying heart disease.”

“I like how “Huge” helps the viewer see the various personas we take on to cover our pain,” explained Hoeffner. “Wil comes across as a tough, ‘I don’t care’ personality. She has achieved this by building a wall of anger around herself. She thinks this wall will keep the pain out but what’s she’s really doing is keeping the pain locked inside. In episode three we see everyone raise their flags and surrender from daily attacking others and ourselves. Wil is the only one that refuses to surrender by secretly stuffing her flag into her pocket. Stuffing our feelings away with food continues to build that wall. The key is to feel those feelings, heal them and ten release them.”

This spring, Hey U.G.L.Y. organized the “Walk to End Childhood Obesity,” led by Dan Evans, who competed on “The Biggest Loser” Reality TV show. The recording artist, who lost 132 pounds on the show, said his weight began to escalate at the age of 13 and, by 21, had snowballed to 310 lbs. He knew his weight would prevent him from fulfilling his dream of becoming a country music performer. While he craved attention, Dan said he didn’t want to be in the spotlight because of his weight.